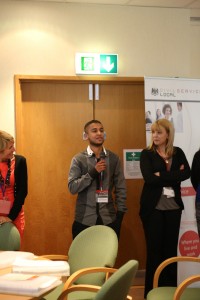 I joined CS Resourcing in March and to learn more about the work of the other teams in CSResourcing, I visited Lawress Hall in Lincoln to observe the Civil Service Local's East Midlands Academy in action.

The Academy provides development opportunities for talented individuals who wish to progress and is aimed primarily at AOs and EOs who may not necessarily have other talent schemes available to them. I was impressed with how widely represented the Civil Service was and I met with delegates not only from DWP and HMRC but from DCLG, ONS, executive agencies such as the Gangmasters Licensing Authority and even local government employees.

The Academy is a four day residential event, (of which I attended Day One), filled with activities that help to develop the delegates’ skill sets, build upon the competency framework and pushing them (gently) out of their comfort zone. On arrival, the delegates are teamed with colleagues from different departments to form families, helping to foster relationships with people outside of their own networks. Another key feature of the academy is for each of these families to design a project promoting Civil Service Reform that they must pitch to a panel of ‘Dragons’.  With the support of their dragon and a coach, they implement the project over the next twelve months. Previous projects have included introducing an advisory support service to the families of those recently imprisoned and the creation of ‘The Inspirational List’ – a collection of resources that have inspired senior managers – that is now on Civil Service Learning to inspire others.

An overarching theme to the week is the importance of change, reform and working collaboratively putting the CS Reform Plan into context and setting out what it means for departments, teams and individuals. In the morning, Michelle Wyer, Assistant Director of the National Minimum Wage Team, HMRC, led the session encouraging delegates to discuss the impact they had seen of CS Reform and how the benefits to customers and the public service are being recognised.

Some of the themes were also explored in the afternoon when each family (role playing as a consultancy) were challenged to think strategically – delivering advice to a zoo’s CEO, on how the zoo could ensure its survival through structural change and thinking innovatively on ways to modernise itself and attract more visitors. This activity was enjoyed by everybody, including myself - and I found it quite difficult to remain an observer at times! Each family then had to present their advice to another group and I was impressed with how everybody rose to the challenge.

My personal highlight of the day was the opportunity to hear from inspirational speaker John Flanner, who lost his sight at the age of 19 and who won the Outstanding Achievement prize at the first CS Equality and Diversity Awards in 2006 for inspiring so many people with his Diversity presentation ‘Fear, Fun and Faith’. John told us how the support and encouragement he received from a senior manager had inspired him to face his fears of moving outside his comfort zone and raise awareness of the challenges of having a disability to inspire others.

I was saddened to leave at the end of the day when the fun was due to continue in the evening with team-building activities planned for after dinner. It was an excellent opportunity for me to learn more about the fantastic work happening in the regions to support development and increase engagement and I’d like to say a big thank you to everyone who made me feel so welcome – especially Pauline Tulloch, the project manager, Janice Smith, Jayne Banner, CBE, the SRO for Civil Service Local - East Midlands, Leo Castledine, and everyone else who took the time to speak to us.