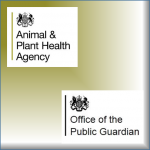 Chris Cole who works at the Office of the Public Guardian took advantage of the job shadowing opportunities we have to offer and recently spent a day with colleagues at the Animal and Plant Health Agency. Read on to hear about his experience.

I have to honest, I was a little apprehensive when applying for the shadow positions as to how I would get on in a new department combined with an unfamiliar business area, and ultimately how beneficial the whole experience would be.
Another truth is that before spending the day shadowing, I had no idea what the Animal and Plant Health Agency (APHA) was, let alone what it was tasked with doing. As it turns out, I’m sure you’re probably far more aware of their work than you might think. Dealing with everything from Pet Passports to containing outbreaks amongst farmed animals or plants, the APHA has a diverse list of areas it is responsible for. It was surprisingly refreshing to spend the day learning about a part of the Civil Service I was completely new to.

As is usually the case with trepidation, it was completely unfounded. The experience I gained from spending time around professionals with a wealth of experience was an opportunity I previously would not have had. Not only were the group of staff very good at what they do, they were extremely kind and understanding with me, ensuring that I was included in anything and everything that was going on.

My day at the APHA began with a nice informal conversation and a cup of tea. I sat down with a member of the team who went through the areas of responsibility for the agency, and how communications fitted into the picture. It was really interesting to hear the complexities of the work they have to do. It was the first in a series of really useful one-to-ones where a member of staff from each segment of the team would sit down to talk me through their job area, the processes they follow, and how it fits into the wider department. They have some excellent stories to tell.

I was also fortunate enough to sit in on larger meetings with members of staff from across various departments regarding everything from group strategy to new system implementations. It was particularly interesting to see how the communications team I was shadowing fitted into decision making.

There was a final aspect I was fortunate enough to be afforded, which was particularly helpful. Simply sitting with members of the team and going through some of their work. I can’t enthuse highly enough how useful an experience it was to sit with skilled staff who had useful insight and advice to offer.

I would highly recommend a day’s job shadowing if it is an area of work you are keen to gain some experience in, or just a department that you would like to learn more about.