In October we included an article about volunteering to help the Institute of Physics with their Lab in a Lorry, an interactive mobile laboratory which gives young people the opportunity to explore science through experiments. If you are interested in communicating science to a young audience, Lab in a Lorry (or Labordy mewn Lori) still need volunteers with a scientific or engineering background for events across Wales during school term time until March 2015.

The previous blog item is here and has leaflets in Welsh and English with more information and the dates in December.  If you would like to volunteer or would like to find out more about dates in the new year, please contact James Bamford

To give you a flavour of what is involved, Mike Bradley from the MOD and Jacqui Murray from Natural Resource Wales tell us more about their volunteering experience: 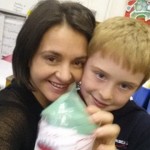 I’m a mum. I’m a manager. I’m a female engineer.  In that order too. I’m now a Science Technology, Engineering and Mathematics (STEM) Ambassador.

I went to a conference about Energy, but sat in on a breakout session called STEMnet.  The mum in me was interested to see what they did and was there anything that could benefit my children and their school.  I came away thinking actually this could be something would help me. It could give me a way I could support my school and their delivery of STEM subjects without committing to doing anything too much.  After all, I’m a busy working mum!. I thought it might also be a bit of professional development.

So I decided to volunteer for the Lab in a Lorry first.  A day doing physics experiments sounded fun.  I was wrong.  It was fantastic. I can now explain why the sky is blue, how sound can break glass and how fibre optics work.  It also gave me the confidence that I could be a STEM Ambassador for my son’s school. If I could engage and enjoy doing physics with comprehensive school kids, 7 and 8 years olds should be a doddle!

I approached my year 3 son’s teacher and she was interested.  The syllabus this term was around Marvellous Machines.  So I emailed STEMnet and Sian came back with some suggestions.  Rockets! I knew some other children’s parents with engineering backgrounds so we set an afternoon in the diaries and we had a think about their syllabus;.  The plan was to use a stomp rocket that blows bubbles to demonstrate air resistance.  A different stomp rocket that had very light rockets to demonstrate gravity and a bottle rocket, that uses water to demonstrate thrust!  All supplied by STEMnet.

The day came, and the weather was appalling.  So we had to think on our feet a bit.  We talked about STEM, what we did and what the forces are that act on a rocket inside the classroom.  The kids were great.  And they knew so much already, so it was great to go and reinforce what they already knew.  The weather cleared a little and, in light drizzle in Oldcastle playground, 50 children came to see the rocket launches.  They were so engaged.

So they have now made their own bottle rockets, and I just need to manage my work diary and that of the other parents who now want to come in to do the major launch at mission control (the local playing fields).  Fingers crossed for good weather.  We plan to time who’s rocket stays in the air the longest, such that the children can rank the results.

I was asked to speak at the Women’s Engineering Society ‘Inspiring Engineers’ conference - a 120 female engineering students and recent graduates in Aston Uni.  I gave up a precious Saturday.  But I got to inspire young female graduates and in turn be inspired by them.

Back to the day job in Natural Resources Wales, I’ve been sharing what I’ve been up to with those around.  Hopefully inspiring other parents (and closet geeks) to share the wonder of STEM - building confidence in our schools and our children in Wales. 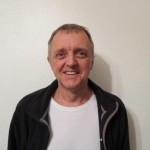 I  recently volunteered to assist the Institute of Physics with something called Lab-in-a-Lorry.  The first session I attended was at Pontypridd High School. The lab had three experiments covering various physical phenomena such as light, heat and sound.  The experiments were medical imaging, resonating a wine glass and scattering of light.  The objective of these experiments was to demonstrate physical phenomena and how they are used in everyday applications.

On the day there were a total of six volunteers from a wide range of backgrounds, myself, two apprentices from GE Aviation, a retired computer programmer and two guys who were engineers but ran their own businesses.  Overall supervision was by a member from the Institute of Physics.  The lorry was parked in the school car park and after our briefing the school pupils began arriving.  They belonged to the year 8 group which is aged 12 to 13 years.  They were sent to us in groups of 18 and we divided them into six per experiment.  Our main objective was to show them the equipment, describe what to do and let them get “hands on” time.

I teamed up with the retired computer programmer and we opted to do the light scattering experiment.  The basic theme was to answer the question “why are sunsets red?”  As well as the main experiment we had a thermal imaging camera and some UV light torches.  We had the pupils for about 25 minutes and I found they had a varying range of abilities and interest.  Some clearly had knowledge beyond the school curriculum.  I found it fairly easy to get most of the class to become interested in the experiment, particularly the UV lights.  When I explained my job in the MoD (Helicopters) to them they seemed particularly impressed, with several saying they wanted to pursue a career in aviation.  This could be because aviation is a major employer, and companies are quite prominent, in the South Wales area.

What did I get out of it?  I met people in science and engineering from outside the MoD and we compared views and opinions.  I had the pleasure of knowing the pupils enjoyed their time in the lab (hearing kids say “that was cool” as they left the lorry) and after getting through almost 60 pupils I hope that I have persuaded at least some of them to consider Science, Technology, Engineering or Mathematics (STEM) as a career.

What did I give? A day of my time.  I tried hard to impart enthusiasm and interest in a career which is increasingly seen as boring and requiring high levels of mathematics.  I answered a lot of questions.I have since attended a further session at Neath school during November and I have also volunteered to become a STEM ambassador.