I hadn't been to a Discovery Session for a while until today, but I think I made a smart move choosing this one. The two hour bite-size event focused on smarter working and how a more agile approach to work itself could benefit us all as civil servants. It was an exciting glimpse in to the future!

Smarter working's quite the hot topic, bringing together the digital agenda and the need to review how we use our estates. So, there was plenty to learn and to discuss. I'm quite passionate about how we can interact with the technology that's available to us in order to create better ways of working in the future, so I was looking forward to hearing what our three main speakers had to say.

Richard Graham started by looking at how to get people more engaged, productive and happy at work. After all, the best employers equip and empower their people to get on with their work. He spoke about how we need to change our culture if we want to make an impact and see improvements. He referred to TW3: which if you don't know means "the way we work", and went on to explain that it's all about flexible working, better collaboration, less travel and more agility. There's currently a major transformation programme aiming to bring people together in 20 Government hubs. They'll be located strategically across the country and will be supported by 200 "mini hubs". It's hoped that this will ensure that work becomes a total experience, where decisions are based on function rather than seniority. Richard stressed that good, reliable and mobile technology is essential to ensure the success of smarter working. He hopes that improvements to existing information technology will lead to a better selection of wireless capability and applications at work, which will be comparable to what many of us can already access, safely and securely at home.

Sachia Thompson brought it all to life by sharing how these radical ideas have worked in practice at the Ministry of Justice, where she's known to many colleagues as "the Hub Lady". As a project manager at the Ministry, she's set up commuter hubs which have led to a great reduction in travel to and from London. She didn't shy away from the implications of entering this brave new world, acknowledging the impact on possible human resources issues such as pay as well as the need for training, which is necessary to make working remotely a success. Sachia also echoed Richard's point about how entirely essential technology is to smarter working.

She shared a very encouraging story about how she's moved from fitting her life around her work to making her working hours suit her needs and achieving a better work/life balance.  The key seems to be providing a choice. So now, her colleagues work from home, a hub, an office or often - a combination of all three. This flexibility has enabled a move from 18 offices to just 1. It's also been great for the environment by reducing travel but also printing costs. It may also prove to be a good thing for partner organisations. She spoke about pilot projects to work with libraries and use their space as work areas which civil servants could book to use. This sounds very promising and there are plans to roll it out further following some positive feedback.

Sachia ended her presentation by focusing on the business benefits of smarter working. Increased flexibility has made them a more attractive employer which has opened up a new pool of talent with better diversity and inclusion. There's better business resilience - transport problems and severe weather warnings are less of an issue if your workforce can complete their tasks at home. A new way of working means a new culture. The emphasis has shifted away from an individual's physical presence and is now firmly focused on output and results. Studies show that smarter working can indeed increase productivity and reduce absence. 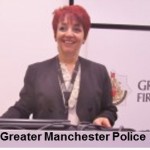 Our final speaker was Mel Bryan from the Greater Manchester Police Force. After introducing herself, Mel explained that although she had never met Richard and Sachia before she would very much be sharing the same message. She has led the change to agile working in the first police force in the country to attempt such a big change. Mel again stressed the need for technology to support  a new way of working and was particularly evangelical about the benefits of using Lync. She went on to discuss the issues of trust and confidence. Mel explained how not working in an office environment actually removes distraction, often meaning that people working at home potentially work harder and for longer hours. She summed up the whole session well by saying that a desk is only one option.

It was a positive and thought-provoking note on which to end. It certainly led to lively debate and some challenging questions from the floor. Feedback from those attending was clear about one thing - there's definitely an appetite for more smarter working here in the north west.