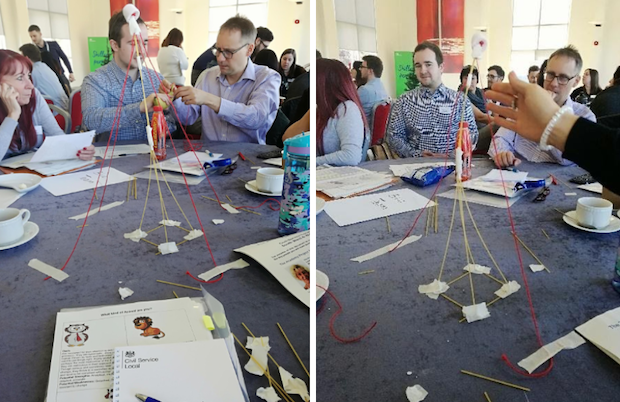 Where it all began……

I think it’s safe to say that we all felt apprehensive and nervous as we made our way to Aberystwyth University on that beautiful sunny Monday morning. Little did we know that everyone that was making that journey felt the exact same way.

We had all been chosen to fly the flags of each of our departments and knew that we would have to fly them for the next 12 months. No pressure!

The welcome that was awaiting us was something that can only be compared to something from a family gathering. Nita, Bernadette (both from CS Local) and all the staff made the first afternoon such a laugh and we were put at ease right from the word go.

The motivational speakers left us all feeling empowered and fully motivated to dive headfirst into whatever the week ahead and the next 12 months had in store.

The blue team’s relationship developed throughout the week by the help of some team building exercises (and also trips to the student union!). Who knew that strong relationships can be formed over spaghetti, sticky tape, marshmallows and some string?

We all pushed ourselves and grew in confidence as the week progressed. The encouragement to work outside comfort zones was very apparent and the feeling of the academy being a ‘safe place’ and the encouragement and support of the team meant the blue team went from strength to strength. We all have different skills which meant each one of us had something to contribute.

Once the team building was over it was time to get down to the nitty gritty of why we were at the academy. After plenty of discussing and exchanging of ideas, we settled for setting up opportunities to job shadow across government and the shadowing network was born. From this we then developed a presentation to pitch our idea to the dragons in the hope that one would come on board.

Preparing for our pitch

By day 4 we were all confident enough to stand up and sell our project to the 70 other academy attendees, all the staff of the academy and the dragons. We all had different variations of confidence with public speaking. But, by the time it was our turn to do our pitch we all spoke as if it was the most natural thing in the world. The one person that deserves a special mention and overcome all their insecurities to really shine during the pitch was Mike.  Da Iawn Mike!

We were lucky enough to be chosen by Pauline Greenwood HR Business Partner from the DWP. 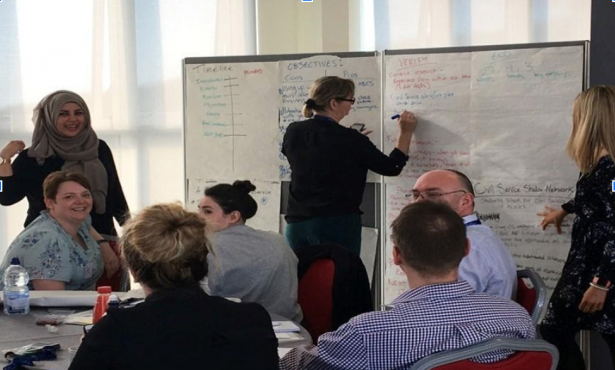 The Shadow Network pitching our idea to the dragons

Overall, we all feel this experience is one that will never be forgotten. The opportunity to network with so many other departments and likeminded civil servants was something we all found useful and feel very proud of what we all achieved during the week.

Finally after all the blood, sweat and tears …….. The Shadow Network graduated from the academy. 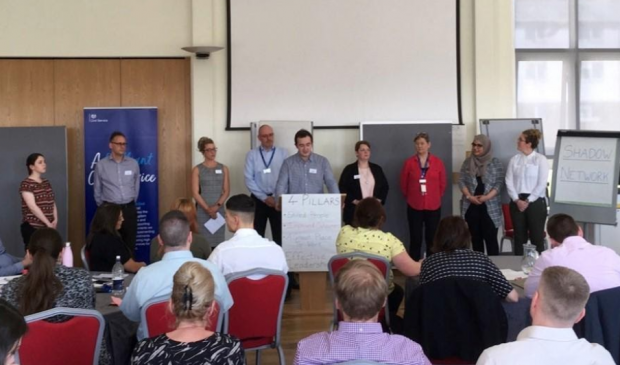 We are 10 months into this project, and we are all as motivated and committed as we were when we left Aberystwyth. We work well as team, support each other and are always open and honest.

Since our halfway point meeting in the IPO, Newport we have worked tirelessly on our launch event. We have successfully approached several Government departments for commitment to provide SPOCS, secured guests to talk about their experiences of shadowing and the benefits to both the business and individuals.

Event details: 19 February 2020, Companies House, Cardiff 9.30 to 13.00 came along and see what the Shadowing network is all about and what it has to offer.

To register, please use: Eventbrite.