We’ve all had that moment, when you realise a presentation’s not going down quite as well as you hoped. Sometimes it’s more obvious than others, though. One time last year, along with a small group of civil servants from across Whitehall, I spent 15 minutes or so enthusiastically talking about our work, what the civil service is, and the exciting range of jobs it offers.

Pausing for questions, a hand went up straight away – usually a good sign. “Yes?” I said. “I didn’t understand anything you just said” came the response.
That was the start of what turned out to be a fantastic few weeks working with a group of Year 9 pupils at Regent High School in North London, as part of Civil Service Local’s school outreach programme. And it was an important lesson in pitching things right for your audience!

Over the following sessions, I and the rest of the team spent time with the pupils talking about not just the civil service, but about CVs, customer service, different routes into the world of work, and how to make a good first impression – not to mention taking them on a tour of the Treasury building and Downing Street.

But that first response – “I didn’t understand anything you just said” – stayed with us. A really important reminder that for many pupils, particularly those from disadvantaged backgrounds, the world we inhabit in the civil service can feel very distant. It certainly did for me at that age, something it’s easy to forget – but looking back, I had no idea what a civil servant was, and had never met anyone who had worked for or with central Government.

The pupils didn’t know what Ministers were, what the Government does, or any of the things we take for granted. Making it seem relevant can be really hard – but when it works, it’s incredibly rewarding. As the weeks went by, the group got much more engaged, asking more and more questions and getting more confident in speaking up and showing interest.

Having spent the first seven years of my career on education policy, doing this was a terrific chance to go back to an old passion of mine, as well as – just maybe – helping raise the aspirations of a group of pupils who might not otherwise have thought some of the career options we talked about were for them. And it’s not just the pupils who were inspired. I came away feeling like we made a real impact – and have since joined the Department’s schools outreach project team. 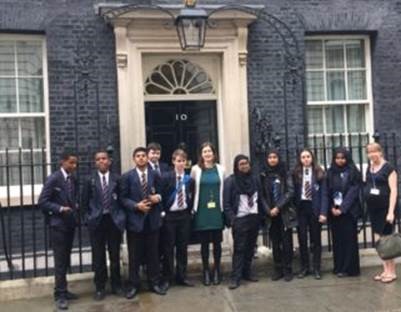