“I’m not going to present lots of slides; this will work better as a conversation.”

With these words Paul Brown let the audience know this was going to be a presentation with a difference. Paul is the Arrears Director for the Child Maintenance Group (CMG) - part of the Department for Work and Pensions (DWP). Over the next 90 minutes, he shared his thoughts - gleaned from 30 years of experience in the civil service - on how good leadership can drive performance.

Paul’s brief review of his career gave an insight into what drives him, as well as how he believes the strategies he follows drive improved performance. He was working in a job that didn’t challenge him when he saw an opening in what was then the Child Support Agency, (CSA - the forerunner of CMG). At the time it was often the subject of negative press coverage, but he immediately knew that was where he wanted to be.

He explained that within two years of him becoming the New Claims Director, the CSA had brought down the number of outstanding claims from 300,000 to 20,000, while 90% of new claims were processed in 12 weeks, as opposed to 26. The blueprint he followed was to manage attendance firmly but fairly, focus performance on what really mattered, and to engage the talents and creativity of colleagues at all levels.

How does a manager focus on what matters? Paul explained that he believes they should ask three questions:

Managers should “create a culture of challenge” to ensure that all colleagues know they are accountable. And this should go both ways in the management chain, so that everyone knows their input is valued. Paul believes that it’s not a colleague’s grade that is important, it’s the talent they can bring to the job. And he said it’s much easier to engage the talent of your staff if they believe you are fair and consistent.

"A manager’s biggest asset is their personal, professional integrity."

A good leader should “paint a compelling vision of the future.” But what is the difference between a manager and a leader? “A manager writes an instruction manual, a leader writes a poem.”

But what happens when something unexpected happens, asked a member of the audience. “Never panic,” said Paul, before adding that a leader should “only have one priority,” and remember to do what’s most important to the customer, not to the organisation.

As for the question about managing the one constant in the civil service – change – Paul asked the audience who actually liked change. Not one hand went up. Paul smiled and admitted: “I hate change –but I love improvement.” He said that a good leader should emphasise to staff that “change is the price of improvement.”

And when does a manager know they have become a good leader? “Your most important job as a leader is to make yourself redundant.” At that point, your team know what to do and just get on with doing it.

At the discovery session was Caroline Pattison, from CMG’s Accrington office, which has embraced the opportunities Civil Service Local provides; several staff are involved in projects or have attended discovery sessions. Caroline, who has worked with Paul earlier in her career, said: “I think he’s a good leader and I was interested in what I could get from the event. I think there’s always something you can learn when you’re a leader.” 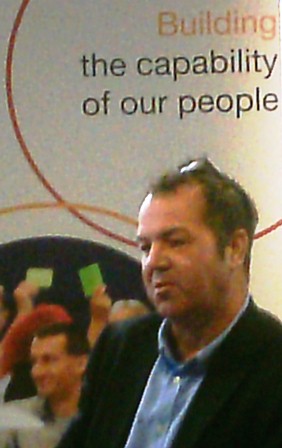 She added: “I think Paul’s very honest and open about what you can do to be a better leader, and he’s given me some good examples from his own experience.”

Linda Devlin, from CMG in Blackpool, said of the session: “It was really good, and it was interesting to hear different people’s experiences.”

It was Linda’s first experience of a Civil Service Local event, and she said she would “definitely recommend it to my staff.”